2
Year Five, Issue 17 is a TOS comic, the 17th issue of the Year Five ongoing series published by IDW Publishing.

At last - the super secret origin of Gary Seven! Who was Gary Seven before AEGIS turned him into a time-traveling secret agent? What, exactly, does AEGIS want?

His whole life, Caleb Howell has believed in the plan of Aegis, even if he knows nothing about it, living in a carefully cultivated vivarium with the other descendants of the humans that Aegis abducted from Earth. And five days after his 35th birthday, Caleb was visited by a man who informed him that Gary Six was dead. Aegis now calls on Gary Seven. With but a moment's hesitation, Caleb Howell walks into the portal, leaving his life behind.

Forcing himself to think of his prior life as a dream, Howell steps onto Aegis' headquarters, observing the many vivariums on asteroids. After taking a moment to gawk at all the diversity of his fellow Supervisors, Howell is ushered into a chamber. A voice declares that Caleb Howell is now Gary Seven. Every language is beamed into his head as he is bombarded with radiation that augments his already enhanced body to make it immune to pain, age, disease and the vacuum of space while locking it into a state of permanent homeostasis. He is now Supervisor 194 and his assignment is to protect Earth. His partner, Isis and his servo are then granted to him.

And so does Seven travel to key moments in Earth's history; the assassination of Archduke Franz Ferdinand, Jimi Hendrix at Woodstock, speaking to Genghis Khan of the lands to the west, ensuring that the T'Plana-Hath made its way to Earth in 2063, and making sure the Spanish Armada would fall in 1588; to ensure that all things happen as they should. However, when a report comes in of a nuclear weapons platform in 1968, with Agent 201 and Agent 347 having passed before they could stop it, Seven must personally intervene, Isis saying it is important that Seven meet James T. Kirk.

With Kirk's help, Seven saved the day but upon returning to headquarters, he furiously demands the truth from Isis. 201 and 347 may have died, but the evidence that they had completed their mission prior to their demise is irrefutable. Isis is unconcerned, it was critical that Seven believe Earth was under threat so that Kirk would believe it. Because that allowed Seven to get a measure of Kirk. When Seven summarizes Kirk as a man who can triumph over the impossible, Isis reveals that that is why Kirk must be neutralized.

Seven is perplexed. Kirk is one of the most decorated officers in Starfleet history, why does The Plan demand his death? Conceding that Seven must know everything, Isis sets the deck opacity to zero, revealing that headquarters exists outside the Milky Way Galaxy, quite literally looking down on it. As Seven muses about the worlds, Isis refocuses him on Earth, the planet that birthed the United Federation of Planets, bringing endless movement, changes and war. Seven protests, the Federation is the embodiment of the best Earth has to offer, scoffing that Isis considers the Tholians, an isolationist race of xenophobes who are a footnote next to humanity, the galaxy's saviours from his kind.

Isis drops her riddles and spells it out. The Federation will engage in many wars. Not just against the Klingon Empire but against the Dominion and the Borg. All that however can be stopped, the galaxy can be placed in a perfect stasis of peace if Aegian technology is seeded and given to the most "consonant" of species. When all life but the Tholians is wiped from the Milky Way, Aegis will have saved another galaxy by keeping it in frozen perfect harmony.

Seven is furious. Isis is telling him that his life has been a lie, raising his people like lambs to be slaughtered. A slaughter, even one that may prevent a quadrillion deaths, that he refuses to take part in. Earth is his home. Affecting her influence on Seven, Isis speaks of how everything can be made as perfect as a vivarium but it is predicted that Kirk will stand in the way of success. Revealing herself to be the man who recruited Seven in the first place, Isis is able to win him over. Still unsure of what The Plan is but committed nonetheless, Seven sets out to save the galaxy. 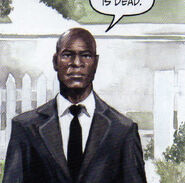 Isis as a man.