2
Year Five, Issue 18 is a TOS comic, the 18th issue of the Year Five ongoing series published by IDW Publishing.

The Enterprise receives a distress call from Alpha Centauri and arrives to find a planet in the midst of a deadly global pandemic. But is nature responsible for this new virus, or is there something more sinister at play? The final voyages of the USS Enterprise continue in this new episode from Eisner-winning writer Jim McCann (Return of the Dapper Men) and superstar artist Angel Hernández (Star Trek: Picard).

Stardate 7277.8, the USS Enterprise draws closer to Earth. As it sails through Alpha Centauri, Kirk reflects on how amazed he was to see the trinary stars five years ago and how it pales in comparison to what he's seen since. He is shaken out of his moping when Nyota Uhura picks up a distress call from Proxima Centauri. A deadly airborne plague is ravaging the colony.

Leaving Sulu in charge, Kirk drags Uhura, Spock, Chekov, McCoy and Scotty into the briefing room. After Spock notes that Proxima Centauri is completely autonomous Earth colony, Kirk delegates tasks, noting that they need video ground surveillance before anyone can be risked and reminding Spock and McCoy to set a positive example. Though McCoy can clearly see the reprimand was meant for him alone, he tells Kirk that something, non-physical, is wrong with Spock. Kirk agrees, having also noticed the Vulcan's unusual behaviour of late but reiterates that this is not the time to deal with it. After images from the surface come in, Kirk decides he has no choice and takes McCoy and Spock with him down to Alpha Centauri City. Beaming down, the three stand in the middle of death, infrastructure collapsing as bodies litter the street.

Coming to the bridge, Chekov puts his security officer training to use and believes that he has figured out who's behind this. Drawing everyone's attention to the lifesign scan, he points out an anomalous blue one among the sea of infected purple, noting that it seems to be hiding. Though Sulu believes it could merely be a survivor of the plague, Chekov has cross-referenced it to their archive and identified it: Isis. Down below, the shapeshifter observes Kirk's team before beaming aboard the Enterprise.

Meeting with Caylx Wairata, Kirk's group is briefed on how the virus works before he begins outlining a mass quarantine plan to stem its tide only to cut himself off when he notices a tear in McCoy's EVA suit. Ordering McCoy's ensigns to return him to the ship, Kirk calls down an EVA suit for Wairata and hopes things are going better on the Enterprise.

As the quarantine facility is set up, Sulu and Chekov make their final rounds only to find splotches of blood. Following the two come face-to-face with Isis, claws barred and ready to conclude their business. 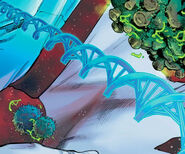 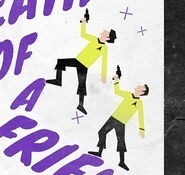 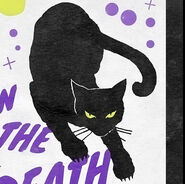 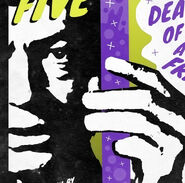