A pandemic raging across Alpha Centauri. A powerful enemy aboard the Enterprise. With death lurking around every corner, the crew will face down one of their greatest challenges yet in the shocking conclusion to this episode from Eisner-winning writer Jim McCann (Return of the Dapper Men) and superstar artist Angel Hernández (Star Trek: Picard)!

After picking up a distress call from Proxima Centauri, the crew of the Enterprise makes a horrible discovery—a deadly pandemic is ravaging the planet. Before they can figure out who unleashed this new virus, or why, the danger comes home when Dr. McCoy discovers a tear in his EVA suit. Meanwhile, Sulu and Chekov are confronted by Isis—who's hungry for revenge!

On Proxima Centauri, Leonard McCoy has been placed in a quarantined box, demanding he be let out. He is the best shot they have at finding a cure.

On board the USS Enterprise, Pavel Chekov and Hikaru Sulu flee sickbay, hoping to draw Isis away from the area until they can regroup with their security team. Confronting the shapeshifter, Isis readopts her Tholian form of Trespasser. Though the crystalline body can refract phaser beams, the barrage proves too much and wounds Isis. The only survivors, Chekov and Sulu, demand to know why Isis doomed Proxima Centauri.

On the planet's surface, the medical bay has been divided by a quarantine wall so McCoy can work with his staff. After Spock and Caylx Wairata are sent off to try and find ground zero of the virus, McCoy tells Kirk that he feels fine, which leads him to theorize that something in human biology negates the virus.

A call suddenly comes in from Chekov, informing Kirk that Isis is the culprit. Needing to focus on the virus, Kirk quickly closes the line, trusting Chekov to handle it. As Sulu and Chekov resume the interrogation, Isis regains the strength to resume her Tholian form, attacking the redshirts. Sulu and Chekov order their men to aim for the joints.

As the casualties continue to mount, Kirk suggests that perhaps Koraxi's research on Proxima Centaurians might offer answers but McCoy refuses to use anything that man gleamed from his immoral studies. After a brief discussion of their loved ones, McCoy boldly takes his helmet off, confident that he will not be affected.

In the wilderness, Spock's team discovers the viral device, ordering Scott to beam it off the planet and somewhere in deep space.

Leaving a trail of security corpses, Isis has finally reached the final leg to the engineering department. Asking if Sulu trusts him again, and getting a positive answer, Chekov shoves a sword in the helmsman's arms before he rushes out. With Chekov's phaser beams as a distraction, Sulu quickly slips past and bisects Isis with his sword. Though the shapeshifter's body slowly heals, the hole in her torso stays open long enough for Chekov to fire an ultimately lethal barrage. Deeming her life as an acceptable loss, and content to deprive the Enterprise crew of the reason why she unleashed the virus, Isis dies.

Now free of his EVA suit, McCoy furiously compares and contrasts human and Proxima Centaurian blood. If he can isolate the human antibodies that are so effectively killing the plague, he can transplant those to the Proxima Centaurians and save their race. After some worry from Kirk about direct contact, the skin of McCoy's test subject returns to normal. The antibodies have worked.

Not knowing how long the human body needs to produce those antibodies however, McCoy is unwilling to wait. Wiring himself into the city's ventilation system, the antibodies are drawn from the doctor's body and sent out across the planet, the species is saved.

Soon afterwards, the Enterprise resumes course for Earth, sailing away from the rapidly healing planet. As Chekov now retakes his position at the helm, Kirk cannot help but wonder about the device Isis used to create the virus, which now drifts aimlessly through space… 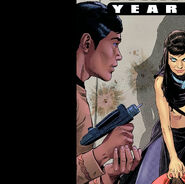 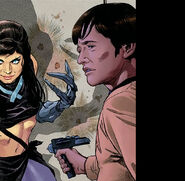 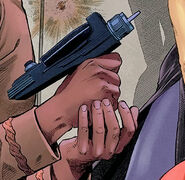 Retrieved from "https://memory-beta.fandom.com/wiki/Year_Five,_Issue_19?oldid=763779"
Community content is available under CC-BY-SA unless otherwise noted.