Having traveled backward in time, Spock finds himself at a critical moment in Vulcan's history—the schism between the Vulcans and the soon-to-be-exiled progenitors of the Romulan people. What will become of the future when Spock interferes with the past?

With Spock still missing, the crew of the Enterprise needs to figure out where—and when—he is if they want to save the future! Meanwhile, on Vulcan, Spock is faced with a choice that won’t only change his life, but Vulcan society as he knows it! The final voyages of the original mission continue in this episode from writer Brandon Easton (Transformers: War for Cybertron, Thundercats) and artist Silvia Califano (Star Trek: Year Five, X-Files: Case Files).

As Rihan collects Zhat's body, Surak's guards surround Spock before the commander reveals that the demagogue is not dead. As Surak slowly recovers, Spock takes the Stone of Gol and implores the guards to pass on to Surak that none of the horrors that plague Vulcan are the products of logic. As Spock and Rihan commander a vehicle to return to the hills, Rihan hatefully promises a final strike against Surak. Words that give Spock calm. For the strike of which his new friend speaks is the one that will kill Surak and herald the exodus of the ancestors of the Romulan people. History may yet be salvaged.

Back in 2270, the USS Enterprise has only power enough for a thirty-second warp jump. Though having bought four minutes, the Enterprise is dead in the water from the strain. Before a discussion can start, Gary Seven arrives, confirming their earlier theories and telling them what must be done to rectify the situation as he sends out an energy wave that repairs the ship's engines. But he promises, once this problem is rectified, he will have his revenge on the crew for killing Isis. And it will not be a painless one.

On Vulcan, Zhat is laid to rest with Rihan promising she will be avenged. Part of the funeral procession, Spock interjects with the words of Confucius, warning about the dangers of revenge. Under the wings of a raptor, Spock proposes that they instead leave Vulcan and find a new world to settle on, pointing out that they are outgunned and easily outmaneuvered by Surak's exploitation of their emotions. As Rihan begins to consider the prospect, enemy forces advance on them. Observing, Spock notes that the nuclear strike, the event that permanently sours the insurgents' reputation in Vulcan society, is days away.

With her warp engines restored, the Enterprise returns to Vulcan just as the enemy fleet closes in. Using a Tholian equivalent to the Pythagorean formula provided by Bright Eyes, Scott determines when Spock has found himself.

Approaching Surak, Spock debates with him how logic and destruction can function. If one side must be annihilated in the event that coexistence proves impossible. When Surak notes that Spock is presuming that mercy is logical, the commander reveals that he always struggles to reconcile both halves of his heritage. Unable to understand Spock's allegory, the two agree to a mind meld.

In high orbit of Vulcan, Kirk doubts that any of the recent events are a coincidence, wondering if they've stumbled upon a trap that was not ready to be sprung, with Uhura adding that Bright Eyes might be the only reason they can do anything about it.

On Vulcan, Surak experiences Spock's struggle through life before they stumble back. Reassembling the damaged Stone of Gol, the two note the God of Death inscribed on it and that Surak has the power to decide how much death will come to their world. Their discussion is then interrupted by a series of intermittent pulses from the tower, morse code sent from Scott through Bright Eyes across time and space. Understanding that it is time for him to return home, Spock bids farewell to Surak, asking only to at least consider allowing the dissidents to exile themselves. Though Surak notes that he needs his opposite's cooperation for such an act, he wishes Spock good fortune on seeking the mental discipline that has so long evaded him. Reciting Abraham Lincoln's old adage about a divided house, Spock makes for the tower as Rihan's forces, under a raptor's gaze, prime their atomic weapons. As the tower sends Spock back to the future, he realizes that he must finally choose a side between Vulcan and human. No sooner is he whisked away does Gary Seven take his place in the desert.

Materializing on the transpoter pad, Spock ignores all questions as he makes his way to his quarters to prepare for what he must do. At long last, he has chosen a side of his heritage.

First officer's log, stardate 370 AD on the Terran calendar
The year of the great schism between the Vulcans and the progenitors of the Romulan Empire. Without my tricorder or other 23rd century devices, I commit these words to memory in the event that I return to my proper timeline. However, the prospects of my return are in considerable doubt, as I may have irreparable harm to the future by disrupting Surak's campaign to rid Vulcan society of Emotion. The flow of time should not have been ruptured. regardless of my personal feelings on the unfortunate death of the resistance fighter Zhat. 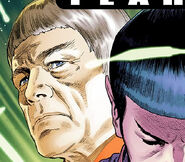 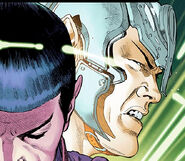 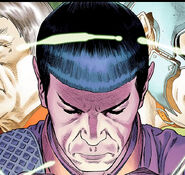