Spock has come to a decision after his time spent in the past on Vulcan. Meanwhile, the Enterprise continues for Earth and Kirk's new life as an admiral that awaits the crew there.

For five years, the USS Enterprise and her crew have journeyed to the edge of the known universe, tackling impossible challenges and menacing foes along the way. But the biggest challenge of all awaits them here at home… and no matter what happens, the lives of Captain Kirk and his crew will be changed forever. The grand finale of Star Trek: Year Five begins here with a new issue from showrunners Jackson Lanzing & Collin Kelly (Gotham City Garage, Green Arrow) and artist Stephen Thompson (Satellite Falling, Die Hard: Year One).

After five years of pain and struggles the USS Enterprise returns to Starbase 1 and Earth. And in honor of this, in honor of all the new worlds and new civilizations they've met, James T. Kirk proudly attaches a cadet badge to Bright Eyes' slimmed down forcefield suit. As the Tholian reflects on their situation, Kirk notes that they are far from home but that any feelings of anxiety are natural. But as the Tholian counters, they have seen Kirk be far from home and be perfectly at ease. As Kirk records his final captain's log while musing on this, the Enterprise finally docks, the mission finally at its bittersweet end.

Accompanied by Montgomery Scott and Nyota Uhura, Spock pays a visit to Starfleet Command for the debrief. A meeting that, since it is a election year, will be attended by Areel Shaw and her Originalist rival for the presidency, Renei. As Uhura begins her summary of what the Enterprise has been through since Lloyd Zeta-9, Renei quickly proves an obstructionist, her biases against non-Federation species twisting the narrative and blaming the Enterprise crew and Bright Eyes for the Tholian weapon platforms detected along the borders. Unaffected by Renei's dogma, Spock highlights the involvement of Gary Seven and the longer Renei detains the crew, the less time they will have to stop whatever Seven is up to. But as Renei counters, the Enterprise's mission is over.

Outside Marcus Laboratory, Kirk contemplates entering, imagining seeing his son, but loses his nerve, leaving his copy of The Odyssey for David.

Beaming back aboard the Enterprise, Kirk heads to the bridge to meet with Spock who reports that the briefing, despite Renei's biases, was a success. Kirk asks his first officer what he thinks makes the Enterprise so special. Though Spock attempts to deflect the question with the Enterprise's long service history and modifications, he is forced to answer that her crew makes her special. Agreeing, Kirk notes that he would only feel comfortable giving the Enterprise to Spock, asking his friend to be her next captain.

Though Starfleet has meant much to Spock, he must refuse. The last year has, he feels, proven that he is unfit to command and too easily emotionally compromised. Spock intends to resign and undergo kolinahr. Mournfully congratulating his friend on finally choosing a side of his heritage, Kirk dismisses him and regards the empty bridge, mourning the best five years of his life.

In the turbolift, one last vestige of emotion overcomes Spock and he punches the wall in rage at the weight of the choice. Before he can compose himself, Gary Seven teleports in, communicating to other Aegis agents that they are mission go and teleports away with Spock.

On Vulcan, Andoria, Proxima Centauri, Tellar Prime and Earth, the anomalous towers come to life, generating large scale Tholian webs that swarm across the sector in an instant, thanks to the towers' tachyon properties, immobilizing the fleet and causing a power loss. As Renei panics, Shaw calmly notes that this is the war the Andorian was panicking about. And as the Tholian fleet warps in above San Francisco, she amends that the war has already been lost. 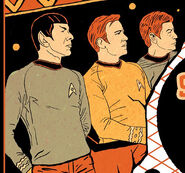 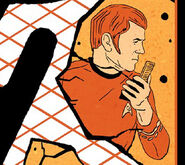 Dedication plaque on the Enterprise bridge. 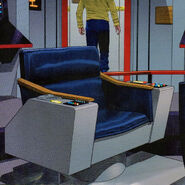 Command chair on the Enterprise bridge. 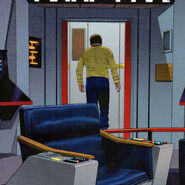 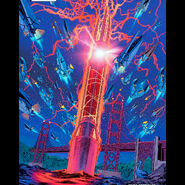