A Tholian horde bearing down on Earth, a time-traveling madman out for blood, a rot festering within the highest levels of the Federation that’s about to explode – and that’s just where we begin! The biggest battle the Enterprise and her crew have ever faced continues in part two of the amazing three-part finale of Star Trek: Year Five from showrunners Jackson Lanzing & Collin Kelly (Gotham City Garage, Green Arrow) and artist Stephen Thompson (Satellite Falling, Die Hard: Year One).

As Starfleet is incapacitated by the Tholian webs, salvation again comes from the USS Enterprise whose previous experiences with Tholian technology allows them to mastermind the idea to freeze the webs. Jettisoning tonnes of water, the Enterprise shatters the web holding it. But salvation comes from Bright Eyes who notes that the only way to stop this attack is to convince the High Council that humans are not a threat. The Tholians will never tire and outnumber the United Federation of Planets by a large margin. But if Bright Eyes could link with the Council and share their experiences with them, the attack would stop. Kirk though highlights the flaw in this plan. Isn't it possible that Bright Eyes could gain the Council's distrust of humans? Bright Eyes acknowledges that they might, but is confident that they won't. Determined, the Enterprise heads to the edge of the solar system to confront the Tholian flagship.

On Earth's surface, Spock is gestured inside the Tholian tower by Gary Seven. Seven briefly explains Aegis to Spock before telling him why "The Plan" exists.

Within Spock's own lifetime, the moon of Praxis will detonate. And from the deaths of millions of Klingons, the Klingon Empire will learn only the value of political murders. And not long after that, the peaceful Cardassian Union will discover the value of fascism and spread to neighboring worlds. Then misunderstandings during the first contact with the Tzenkethi will see the death of a quarter of Starfleet's diplomatic corps over two decades of war, one that will end with the Tzenkethi's potential drastically reduced. And in the 24th century, the Borg Collective will emerge once again and prompt a militarization of all four quadrants. And by the century's end, rogue synthetics will burn Mars before a supernova does the same to Romulus. And before a thousand years have passed since the end of the 23rd century, all of the galaxy will burn.

As the memories slowly erase themselves from Spock's mind, Seven tries to have Spock join him, noting that a Tholian conquest of the Milky Way Galaxy will bring Kolinahr for all. Capitulating to the logic, Spock offers his hand. As Seven goes to shake it, Spock instantly crushes the appendage, noting that he is not a being of pure logic. Seven's plan arises from a place of short-sighted brutality, understandable given his time on Earth, and Spock's experiences have allowed him to see the illogicality of it. With little ceremony, Spock calls for a transport, beaming away just as Seven manages to draw his blaster.

Stepping onto the burning bridge of the Enterprise, Spock reports what he remembers of Seven's plan and its endgame of locking the galaxy in a perfect stasis. Their true goal is not Tholian supremacy, it is a temporal collapse. Nostalgia taken to its extreme. When Spock requests permission to take his station, Kirk refuses. That is now Bright Eyes' post. Invoking Starfleet Order 104, Kirk assigns Spock to the captain's chair. There is no crew better suited to confront the Tholian flagship but now that Aegis has tipped its cards, it is time for Kirk and Seven to have their reckoning. As Kirk beams away to confront his foe, Spock takes command. The mission ahead of the crew is one of paramount importance with little chance of success and relies entirely on keeping the ship at maximum warp. By all mathematics, it is an impossibility. And given the Enterprise's track record, impossible does not stand a chance.

At Spock's command, the Enterprise doubles down, blasting towards the edge of the system. When a persistent and heavily shielded Tholian warship harasses the Enterprise, Uhura has the idea to use the relics from Hesperides I. Opening a frequency, the Tholian crew quickly turns on each other. But no sooner is that threat dealt with, a wall of Tholian ships bar the Enterprise.

Having another brainstorm about Tholians, the crew notes that the Tholians are essentially matter replicators. Indeed, their entire societal growth is done via replicators making almost any element in existence. Chekov hits on the idea of using potassium-rubidium quantum gas. And with her increasing familiarity of Tholian frequencies, Uhura is hack into the warships to have them flood the crafts with the gas, freezing and shattering the Tholians. Passing through the debris field, the overworked Enterprise finally comes to a stop in front of the city-sized Tholian flagship.

Kirk tries to speak to Seven, unapologetic about his future actions angering Aegis but sympathetic to the man's desire to feel special. When the conversation turns to loss and Seven's mourning of Isis, Kirk points out that she was Seven's handler and asks Seven to work with him. Wryly, Seven agrees. Isis was his handler but also, he realizes, his leash. Thumbing his servo, Seven notes that the book is closing but he can go back and rewrite the first chapter. As he dematerializes, Kirk fires a second too late.

In 2265, Kirk steps off the shuttle and onto his new ship. Approaching, Gary Seven opens fire on the new captain. 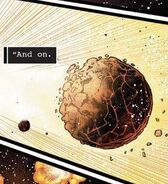 Destruction of Romulus in 2387. 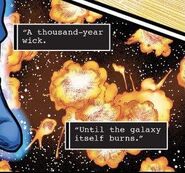