7018.3
Year Five, Issue 3 is the 3rd issue of the Year Five miniseries, published by IDW Publishing. It was released inJuly 2019.

With their clash with the Tholian Assembly still fresh in their minds, the crew of the Enterprise, along with their new Tholian passenger, encounter a strange new threat on a very familiar world. The final adventures of the five-year mission continue!

After receiving a distress call from an unexplored planet, Captain Kirk and the crew of the Enterprise have rescued a Tholian child, the lone survivor of a massacre. So far, this rescue has led into a direct confrontation with Tholian dreadnought its devastating stasis weapon. Thanks to some quick thinking, the Enterprise crew seems to have left the Tholians behind, but with the child survivor still aboard and unable to communicate wit the rest of the ship, this surely won't be the last spot of trouble Captain Kirk runs into on his way back to Earth...

As the USS Enterprise sails through space, Spock reflects on the dangers of having the Tholian child aboard, noting that the language barrier means even the tiniest syntax error could spell total war between the Assembly and the Federation. He is drawn from his musings when Chekov detects a field of starship debris, with one looking suspiciously like the Phoenix, in a nearby star system. One that, to McCoy's horror, Sulu is able to identify as having one inhabited planet: Sigma Iotia II.

As Kirk tries to allow Carol to let him see David, McCoy barges in and all but drags him to the bridge while telling him that Iotians have begun warp drive tests. Remembering what happened last time, Kirk soon shares his friend's horror, especially when he sees the field of totaled starships. It seems the Iotians have been using the human history of spaceflight as a guide, resulting in a mish-mash of 21st and 22nd century ship designs. A nearby ship approaches and hails, via old style radio waves, inviting Kirk, Spock, and McCoy aboard. As the three prepare to beam over, they pass Scotty, in the process of creating a mobile force field that can recreate the Tholian environment around the child.

On the Iotian ship, the trio are venerated as "The Fathers", before brought down to the now-highly industrialized and sleek surface where McCoy's lost communicator is regarded as the local equivalent to the Declaration of Independence or the Mona Lisa. After meeting with President Kris Jamek and Operations Chief Marcon Cloyed (names that Spock notes are anagrams of "James T. Kirk" and "Leonard McCoy"), the three are ushered to a state dinner where they learn that the Southern Territory is still stirring up trouble for the planet, but, rather than resist the era of galactic expansion, the "Astro-Liberation" movement calls for a push towards space colonization.

On the Enterprise, Scotty finishes his contraption, allowing the Tholian child to move about, surrounded by a forcefield of extreme heat. Having other matters to attend to, Scott leaves the child under Uhura's care so she can try and establish communications with them.

As the trio ride in a limousine, the Iotians tell them of how they reviewed Earth's, frankly war-torn, history, and found the concept of a representative democracy very appealing to them. The tour then takes them into "Campaign Row", the one street in the city where political banners are allowed to be seen, something McCoy approves of, as it is election week. Presidents here are only allowed a six-week term. Jamek will be gone by midnight.

As Kirk question this philosophy, the Astro-Liberation movement arrives, led by their old friend Jojo Krako, knocking over the vehicle. When it is clear Krako has come for a hostage, Spock volunteers himself.

At the local hospital, Kirk and McCoy briefly oversee Cloyed's prone form before they return their attention to Kirk's melancholy. Knowing that today is David's birthday, McCoy rightly guesses that this is why Kirk tried to speak to him. Taking his friend out to the balcony, Kirk reveals that even a womanizer such as he was eager at the idea of becoming a father, having drilled himself rigorously for the task before Carol decided to cut ties with him. Now however, he understands why. Carol knew that David would need strong parental guidance, and Kirk... doesn't even know who he is outside of Starfleet.

On the Enterprise, automatic safety protocols eject a cloud of irradiated plasma from the warp core. Believing the Tholian is responsible, a group of redshirts corner them and Uhura before Scott arrives to try and deescalate the stand-off.

In the headquarters of the Astro-Liberation party, Spock tells Krako that, while his policies have merit, the only way he can enforce them is by running the right candidate. In the morning, Kirk and McCoy worryingly discuss the lack of contact from both the Enterprise and Spock before the latter party makes himself known...

...because he is the right candidate!

Chicago Mobs of the Twenties • Declaration of Independence • Mona Lisa 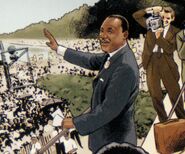