7025.8
Year Five, Issue 5 is the fifth issue of the Year Five miniseries, published by IDW Publishing. It was released inAugust 2019.

During an investigation of a long-dead world, the crew of the Enterprise uncovers a mysterious device that at first appears to be a universal translator. But as Uhura investigates this strange new device, she'll quickly discover there’s more than meets the eye about the Truth Artifact!

On stardate 7025.8, the USS Enterprise hovers over the ruined planet of Hesperides I, called away from its cruise back to Earth to collect archaeological samples. As the ruins are explored, Kirk's attention is grabbed by several markings consistent with energy weapons, speculating, despite Spock's warnings against logical leaps, that the planet fell victim to a war that wiped out the population. As the last of the artifacts are being loaded up, Kirk meets with Doctor Bettie Bennett to break the bad news that quarantine protocols are in place. Until they reach a starbase, no one's touching the relics. Besides, there's enough alien life aboard the Enterprise right now.

As the Enterprise sails through space, Kirk pays a visit to Uhura and Bright Eyes. While Uhura has established a shared understanding of mathematics with the child, she is no closer to cracking the spoken word, not even with binary communication. Kirk is undeterred. They've seen the Tholian Assembly speak Federation Standard, so the reverse has to be possible. As Kirk leaves, his eye is drawn to a teddy bear with Uhura explaining that she brought several toys from several alien races to try and break through to the child. Jokingly, Kirk suggests trying the fad of the 1970s: the pet rock.

In the cargo bay, the alien artifacts pulse with power, a purple eldritch light bypassing the quarantine field and spreading throughout the ship.

In the mess hall, Dr. Bennett is talking the artifacts to her less than enthusiastic colleague Alton before she snaps and walks away, leaving her friend very confused. In the hallways, Chekov is slapped by a female crew member and becomes hostile when Uhura queries about it, assuming that she's on her side, and storming away. In engineering, a brawl breaks out between two redshirts, forcing Scott to separate them and confine them to quarters.

In the observation lounge, Scott, Spock, and McCoy report the strange fights to Kirk, who orders McCoy to perform brain scans on everyone who seems afflicted and the artifacts to be examined. The trio react with skepticism to Kirk's mention of "ghosts", a term Kirk cannot recall using. This prompts McCoy to declare that scans for all four of them, something Kirk orders him to do a second later. This leads Spock to theorize that whatever is causing heightened aggression is also affecting communication skills. To be safe, Kirk contacts Uhura via personal communicator and orders her to sickbay to be a translator.

As Bright Eyes sits in their heat shield, Uhura hands them the teddy bear as company, only for its crystalline claws to accidentally destroy the toy. As Uhura promises a sturdier toy, Bright Eyes, in broken Standard, apologizes for destroying the toy, much to Uhura's shock, and asks that she stays with them. 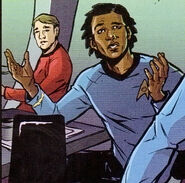