7145,3
Year Five, Issue 9 is the ninth issue of the Year Five ongoing series, published by IDW Publishing. It was released in December 2019.

After their close call with the Tholian Assembly, the crew of the Enterprise escorts Ayal back to their home planet, only to find a society teetering on the brink of catastrophe. The final voyages of the original five-year mission continue here!

It has been two weeks since the USS Enterprise escaped the Tholian web. With two months until they return to Federation space, the atmosphere of the ship has taken a more somber turn as the possibility of a Federation/Tholian war weighs heavily on everyone, combined with the fact that Kirk has yet to awaken from his coma. The only ones not affected by this grim mood are Hikaru Sulu and Ayal, finding comfort in their new relationship. But even this good mood cannot last too long when Ayal reveals that their body, away from the seas of their homeworld of I'Qos for too long, has begun to calcify. Soon enough, the Enterprise drops out of warp over the planet.

On the bridge, after scans confirm that the planet is Class M but lacks any orbital weaponry, Spock orders that first contact protocol be adhered to. As Scott highlights though, that will be a challenge. Though they are only 1.8 billion lifeforms on the planet, they are divided nearly right down the middle. As the moisture of the planet prevents transporters, Spock heads down in a shuttlecraft with Chekov, Ayal, and Sulu. Before heading out, McCoy informs Spock that Kirk's condition, while showing no signs of improvement, is stable.

As the shuttle touches down on the moist planet, Ayal informs their friends that the unique properties of their homeworld's water will allow them to breathe normally, guiding them to a massive subaquatic city. Outside of The Crest, the most important building in the city, Ayal is greeted by Bryni, current speaker of the Crest and guide to all I'Qosa who asks for their help in solving the factional divide that grips the planet.

Within the Crest, the away team is briefed on the Lo'Kari, a sect of I'Qosa that have abandoned their watery roots for the surface, their bodies hardening as a result. The Lo'Kari chancellor has requested a meeting and it is Bryni's wish that Spock act as a neutral third party.

Come morning, the group surfaces at the shipyard of heavily industrialized city, making for the bar where discussions are to be held. Though things start out well, both Bryni and his opposite civilly greeting each other, Sulu's distaste for the local brews gives away their alien nature, spiking tensions and bringing out firearms. In the chaos, a Lo'Kari, tackles Chekov, his phaser, mercifully on stun, firing wildly and striking the Lo'Kari chancellor. As a panic breaks out, the group is forced to evacuate and take a mourning Bryni to safety.

On a rock, Spock tries to call the Enterprise to no avail while Sulu chews out Chekov. Ayal comforts them both, assuring them that war would likely have started with or without them as fire rains down from the sky. The Lo'Kari have activated their seaburners and are boiling the planet, with the intent of killing every last I'Qosa. 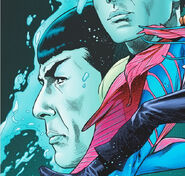 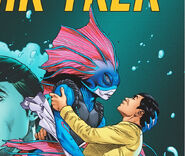 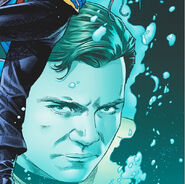