4173.15 - 4179.1
Year Four, Issue 3 was the third of a six-part comic book miniseries written by David Tischman and published by IDW Publishing in 2007. The story took place during the fourth year of the five-year mission of Captain James T. Kirk aboard the USS Enterprise.

Captain James T. Kirk becomes suspicious of his crew after returning from the devastated colony on Phi-11. Mr. Spock and Dr. McCoy try to reassure him that nothing's wrong—unless Kirk's two most trusted friends are in on the plot, too. What has infected the crew, and how—and who's left to help Kirk regain control of the ship?

Captain's log, stardate 4173.15. The Enterprise is in orbit of the colony on Phi-11, a remote planetary system at the edge of the galaxy – the frontier of known space. Just like the first settlers of the American west in Earth's early 19th century, man is alone out here – on his own… and life among the stars can be dangerous. I only hope our fears are unfounded.

The landing party discovered all of the colonists to be dead after having unearthed a corpse buried in an escape pod for a millennium. While reviewing Pampla's paranoid-sounding log, Spock heard a strange sound just before Pampla died. Spock brought the recording to Kirk and McCoy, but before he could replay the log, Kirk was called to the bridge. Sometime later on the bridge, Hikaru Sulu diverted the ship's course, claiming it was on Kirk's order. Spock assumed command, announcing that Kirk had been infected with a virus on Phi-11, and ordered security to take him to sickbay. When Kirk resisted, Spock knocked him out with a Vulcan nerve pinch.

In sickbay, Kirk appealed to Christine Chapel, saying that everyone else had been infected but them. Chapel, having observed unusual behavior from M'Ress and Kevin Riley in the mess hall earlier, believed him and helped him knock out security officer Brad Collins. Out in the corridor, as they were confronted by Sulu and Ryan, Kirk ordered her to flee. Over the loudspeaker, Spock announced that their journey was complete — Kirk and Chapel had to be found and transformed. Aimed at Kirk, Ryan and Sulu generated the same strange sound heard on the recording. Shortly thereafter, Kirk and Leonard McCoy broke into a locked shuttle where Christine Chapel had been hiding.

Kirk, Spock, McCoy and Chapel beamed down to a planet and simultaneously generated the strange sound.

Captain's log, supplemental. The Ur is a viral life form with a communal sentience, infecting its carriers through sound. It lay dormant in the body of the alien pilot on Phi-11 for over a thousand years. Unfortunately, its unfamiliarity with human physiology killed the colonists… I have submitted my report to Starfleet, and the colonists' families have been notified. 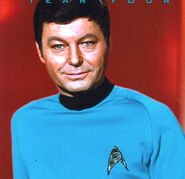 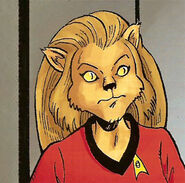 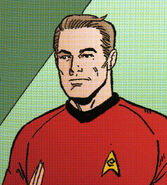 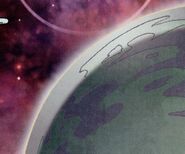 Surface of Ur homeworld.