2269
"Year Four, Issue 4" was the fourth of a six-part comic book miniseries written by David Tischman and published by IDW Publishing in 2007. The story took place during the fourth year of the five-year mission of Captain James T. Kirk aboard the USS Enterprise. It was drawn by Rob Sharp & Joe Sharp and dealt with a society obsessed with television.

From solicitations: On Viden 9, the U.S.S. Enterprise encounters a planet similar to 21st century Earth, where the population has a never-ending appetite for entertainment, and people will do anything for fame. When Captain Kirk and his crew become media sensations, the competing networks that control Viden's government won't let them leave, unless Kirk agrees to a deadly "finale."

8,743 television channels were available to the public on Viden. A leading media organization, Trilateral Broadcasting Company, was filming an episode of the sitcom Welcome to the Family when the actor who played 18-year-old Cam sneaked offstage and attempted to flee the studio. A security guard shot him in the back – death was the penalty for trying to break a network contract. Cam's passing was witnessed by a landing party from the USS Enterprise, who were there to facilitate a cultural exchange between Viden and the Federation. An i-News report publicized Captain Kirk's negative reaction to the death, spurring a drop in public approval for Trilateral.

Kirk told Trilateral's president of programming Ted Tinker they were done with their survey mission, but Tinker replied that Viden wanted to see more of them. Tinker had Kirk, Spock and McCoy locked in cells. When the guard Kren asked Kirk for an autograph, Spock was able to apply a Vulcan neck pinch so they could escape. Unfortunately they escaped onto the stage of a live transmission of The Dr. Marv Show. Afterward, Kirk agreed to sign a contract to produce a variety show special, but lamented that he couldn't have his crew tied up on a TV series for five years.

Kirk auditioned Hikaru Sulu, Nyota Uhura, Christine Chapel, Leonard McCoy and Spock for the variety special, but Tinker's assistant Brandon had been reviewing Kirk's budget for the show and realized the production costs were too high. Tinker renegotiated for Kirk to produce a lower-budget reality show about life on the Enterprise. Tinker had bombs attached to cameras throughout the ship. After two weeks without anything dramatic happening, ratings plummeted. At that point, Montgomery Scott cut off the cameras and began dismantling the explosives. The ship left orbit, it's mission completed. 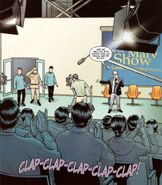 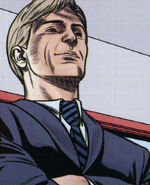 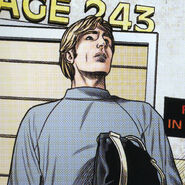 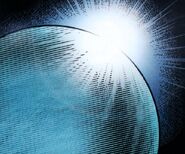