5930.5
Year Four, Issue 5 was the fifth of a six-part comic book miniseries written by David Tischman and published by IDW Publishing in 2007. The story took place during the fourth year of the five-year mission of Captain James T. Kirk aboard the USS Enterprise. It was drawn by Steve Conley, who also drew issues 1 and 2. In this story, a dangerous scientific experiment goes awry.

From solicitations: The U.S.S. Enterprise is dispatched to observe a Quark Gluon Plasma experiment at the Gemini Science Station — in orbit between two suns — in an effort to learn more about the beginning of the universe. But the formation of a black hole from the experiment's outcome means eminent danger for Spock and Dr. McCoy who are stranded on the debilitated science station.

"Captain's log, stardate 5930.5. Twentieth-century scientists used particle accelerators to smash gold atoms together at near-light speeds, attempting to create quark gluon plasma... a cosmic soup present at the birth of the universe. Those tests remained inconclusive, because of their limited technology.

Spock is on board the Gemini Station and contacts the USS Enterprise to inform them that he is beginning the separation process. With a burst of gases, the two sections of the station separate and drift apart. Chekov informs Captain Kirk that the two modules are approaching their final coordinates. He then comments that if all works out, they'll see what the Universe looked like at the beginning of time. Arex interrupts to suggest a possible negative outcome, and Kirk tells him that he'll take the odds that the simulations have given them.

Spock finishes his preparations and brings the deflector shield online. The second module does the same, and a particle beam from each crosses space, joining in a beautiful show of light. Suddenly, the Enterprise is hit with a jolt, and Spock reports that there are fluctuations in the quark gluon plasma. A large, dark cloud begins to envelop the second module.

Magnetic interference from the cloud prevents a clear signal from getting through as Kirk, Scott, Dr. McCoy, Chekov, Sulu, Arex, and Uhura meet. Chekov notes that the experiment was far more successful than they'd expected, and that the cloud of plasma had become a singularity. Scott notes that the Enterprise has enough power to break away from the field, but that it is too dangerous to use the transporters to try to rescue Spock.

Kirk tells Chekov that as acting-science officer, he is to find a way to rescue Spock. He then apologizes to Arex for taking the wrong odds. After the others leave, McCoy and Kirk discuss the situation, realizing that they're both tense about the circumstances. McCoy suggests taking it easy on Chekov as he is still only in training as a science officer, and that he likely feels responsible for the situation. As they speak, another jolt hits the ship, and they learn that the cloud is growing exponentially and that the Enterprise is now trapped.

On the station, Spock is working on the systems, trying anything to escape. On the Enterprise, they learn that the gravitational pull is too strong and putting any more power into the engines and Scott reports that they risk damaging them. Suddenly the station fires something at one of the stars and a large solar flare leaps out, approaching the cloud. The gravitational pull stops as the flare meets the cloud, but starts again when the flare burns out.

Kirk contacts Scott and tells him to give full power to the engines, and then has Sulu lock the phasers onto the same spot on the star and fire all banks. An enormous flare erupts out of the star, heading toward the cloud and the station, and the station is pulled into the cloud. Kirk looks on in stunned disbelief before leaving the bridge, and wandering into his ready room. Chekov interrupts and says "It's Mr. Spock, Captain. I think he might still be alive!" He tells Kirk that the transporters would have worked for the instant that the gravitational pull had been nullified, and that due to the time dilation from the intense gravity, he would still be in the beam between station and ship. Kirk calls Scott and McCoy to the transporter room. There is no signal. Then the transporter noise begins as a low, and slow hum. Spock materializes, little worse for the wear, but says nothing.

Kirk tells Spock that it was Chekov that made the leap in logic and helped save him. Spock notes that "Mr. Chekov is a competent science officer. I expected no less." He then comments that he will need to figure out what will be needed to extinguish the cloud before it becomes a hazard and will need Chekov's help. 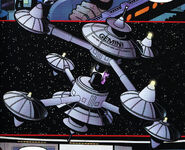