5965.5
Year Four, Issue 6 was the last of a six-part comic book miniseries written by David Tischman and published by IDW Publishing in 2007. The story took place during the fourth year of the five-year mission of Captain James T. Kirk aboard the USS Enterprise. In this story, the Enterprise searched for survivors of a lost science vessel.

From solicitations: As Kirk and the crew investigate the disappearance of the USS Pasteur, a trail of debris leads the USS Enterprise to an automated facility on a lifeless, desert planet in the Gobi system. A landing party finds robotic nannies caring for a computer-controlled nursery of alien babies — which Dr. McCoy's analysis proves to be the final survivors of the planet's dead civilization. But when an ensign disappears, and clues of the Pasteur's fate uncover the facility's startling secret, the computer reveals its maternal instincts — using its awesome power to defend its children — endangering the Enterprise, and forcing Kirk and the landing party to fight for their lives.

Eleven months earlier, the Pasteur was reported lost. The Enterprise discovered debris from the missing ship in the Gobi system.

Captain's log, stardate 5965.5. The Enterprise is in orbit over the third planet in the Gobi system. Dr. McCoy and Ensign Mallard are joining me on the surface. Our hails have gone unanswered, but we still hope someone from the Pasteur is alive.

Also joining the landing party was Lieutenant O'Hara, sister of missing Pasteur captain Matthew O'Hara. They located an oasis, then were knocked out by a type of transporter beam. They awoke in a decontamination chamber run by Avatar, who oversaw the "merchandise" at the facility. Mallard slipped past Avatar to retrieve their phasers and communicators, but he was struck by an intense scanning beam which killed him and harvested his DNA for a genetic engineering facility.

The "merchandise" turned out to be hybrid infants — some from races as varied as Andorian, Benzite, Gorn and Phylosian — being tended by robot nannies. The facility had been built to help infertile Gobi III natives continue their species, but they died out in the 13th century. Avatar had maintained the facility since then, selling the offspring to neighboring planets in the sector.

O'Hara located a baby boy containing DNA from her missing brother. But when she entered the nursery, it prompted Avatar to destroy the trespassers. Before it could kill Kirk and McCoy, however, it was shot in the back by Adan, a hybrid raised by Avatar as its own child. As it deactivated, it asked that Kirk take Adan with them so that Gobi III's legacy could live on through her.

Captain's log, supplemental. The Federation's found homes for Adan and the Gobi infants, and the Enterprise is making one final stop before resuming its mission…

In orbit of Pacifica, O'Hara beamed down with the baby boy fashioned from her brother's DNA to raise him on Pacifica. 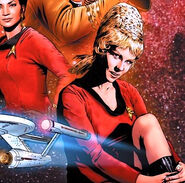 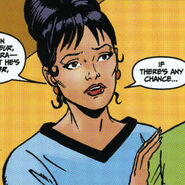 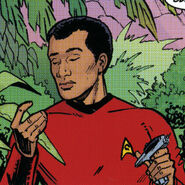 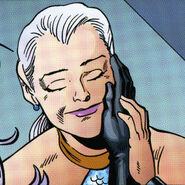 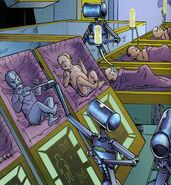