"Yesteryear" was the second episode of Star Trek: The Animated Series. It was produced in TAS' first season and debuted on 15 September 1973. The episode was written by D.C. Fontana and directed by Hal Sutherland. It was novelized in Star Trek: Log One by Alan Dean Foster in June 1974 and subsequently adapted by View-Master. The episode's design of ShiKahr was added to the remastered edition of TOS episode: "Amok Time". Events from the story were revisited in TOS - Crucible novel: The Fire and the Rose, DTI novel: Forgotten History, and in TOS movie & novelization: Star Trek.

VHS teaser
Returning from a mission to the past, Mr. Spock discovers he has erased his own existence!

Captain's log, stardate 5373.4.
After an unexpected delay of some substantial awkwardness, we resumed our original course and are now lying in orbit around the planet of the time vortex. Commander Spock and I will land to carry out basic research for the Institute of Galactic History, in conjunction with and in support of similar research to be conducted by historians Jan Grey, Loom Aleek-Om, and Ted Erickson. Dr. Leonard McCoy will also accompany us, as interested onlooker. (Novelization)

Excerpt from the log of Capt. James Kirk.
Time travel — exploring the past in person — what an intriguing way to research history! Yet there is always the danger that the researcher may innocently set in motion a chain of past events that can drastically alter the present… Starship USS Enterprise has discovered the one spot in the Galaxy where time travel is a possibility: the Time Vortex planet. At a certain point on this planet's surface, all the space-time force fields of the Galaxy come into focus. This point, a crossroads of space and time, is a natural stone arch with a round opening, known as the Guardian. The Guardian has an intelligence of its own. It can program itself to admit visitors to explore any requested time in the past, anywhere in the Galaxy — on immediate demand. Or it can project images of past events for viewing. We are now orbiting the Time Vortex planet. Our mission: to assist in the investigation of Federation history. (View-Master adaptation)

Captain's log, stardate 5373.4.
We are in orbit around the planet of the time vortex, the focus of all the timelines of our galaxy. Our mission is to assist a team of historians in the investigation of Federation history. (Episode)

Captain's log, supplemental.
When we were in the time vortex, something appears to have changed the present as we know it. No one aboard recognizes Mr. Spock. The only answer is that the past was somehow altered. (Episode)

Spock's personal log, stardate 5373.9, subjective time.
The timeline seems to have changed again. Yet I do not believe I have done anything to disrupt it. My memory is quite clear regarding the date my cousin saved my life, and it is tomorrow. The kahs-wan ordeal is an ancient rite of warrior days. When Vulcans turned to logic, they reasoned they must maintain the tests of courage and strength to keep pure logic from making them weak and helpless. (Episode)

Personal log, stardate 5373.9, subjective time.
The time line seems to have changed once more, yet I cannot discover on thinking back anything I have done that might have affected it. My memory is quite clear regarding the actual day my cousin saved my life. That day is tomorrow. The Kahs-wan is an ancient rite of Vulcan's warrior days. When Vulcans turned to logic as the ruling element of their lives, they reasoned that it was necessary to maintain the old tests of strength and courage. Otherwise devotion to pure reason might make them grow weak and incapable of defending themselves from barbarians who might be less advanced mentally and socially. This, in itself, was of course a logical decision. (Novelization)

Personal log.
The boy Spock should be moving toward the L-langon Mountains. He — I — had much to prove to myself. The personal ordeal upon which I embarked was meant to determine the course my life would take. (Episode)

Personal log.
The boy Spock should be moving toward the L-langon Mountains. He . . . I . . . had much to prove to myself. The personal ordeal, I now remember, on which I embarked was meant to determine the course my life would take. Many things are coming back to me now, as I retrace my steps of thirty years past and as I become more familiar with this time of my youth. (Novelization)

Personal log.
Something unexpected has again occurred. The sehlat, I-Chaya, was struck by the poisonous claws of the le-matya he fought. He is dying, unless we can find a healer, and soon. (Episode)

sehlats were in, or mentioned in

le-matya were in, or mentioned in

VHS release with "Beyond the Farthest Star". 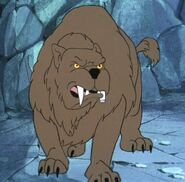 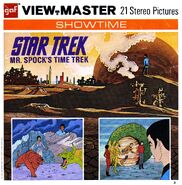 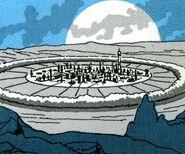