The Original Series No. 53

Captain's log...
final entry... So... so much blood. So little time. Bearclaw... was very thorough. Stabbed me. Sealed the door. That took foresight. Hallmark of a good officer. He's come a long way. I should be proud. Am I... dying? Can't be. My life isn't flashing before my eyes. Terminal. Got to get to terminal. Call for help. Almost there. Almost to... terminal... Terminal. Got to almost there. I'm... I'm... terminal.

Captain Kirk has been stabbed in his quarters, apparently by Ensign Bearclaw. Kirk crawls toward his communication terminal to call for help, but collapses before he reaches it. He hallucinates that he is at the wheel of a sailing ship floating through space near the Enterprise. Looking through a spyglass, Kirk sees Spock on the Enterprise bridge.

On the bridge, Spock becomes aware that something is wrong with Kirk. He orders a medical team to the captain's cabin and joins them there himself. Dr. McCoy and the other medical officers are unable to open the sealed door, but Spock pulls it open with his bare hands. Kirk is rushed to Sickbay.

En route to Sickbay, Kirk has a vision of his dead son, David Marcus, walking beside his floating gurney. Kirk briefly regains consciousness and sits up, but McCoy insists he lie down again. Castille and Burnside are shocked to see their wounded captain rushed past them.

Elizabeth Sherwood, having learned of Kirk's injury, rushes to Bearclaw's cabin. When Bearclaw answers the door, he claims to have been sleeping. Sherwood tells him Kirk might die, to which Bearclaw answers, "Good riddance," and shuts the door.

In a flashback/fantasy, Bearclaw stabs Kirk, but the knife breaks on his chest with a metallic sound. Kirk throws Bearclaw across the room. Bearclaw angrily accuses Kirk of being uncaring, but Kirk protests that he cares about every member of his crew. The knife wound suddenly appears on Kirk's chest.

In Sickbay, Lia Burke announces that Kirk's heart rate and respiration are dropping. Spock acknowledges to McCoy that it would be logical for him to return to the bridge, but does not do so.

Captain's log, star date 9000.8.
Hikaru Sulu acting commander. Still no word on Captain Kirk's status. The concern hangs over the crew, and we're finding it impossible to talk about, or concentrate on, anything else.

Sulu asks Uhura whether she thinks Kirk will be all right; she replies that Kirk has always been there for them. In flashback, Uhura recalls a New Year's Eve during Kirk's first five-year mission on the Enterprise when he came to her cabin, having noticed her absence from the crew party. Uhura was thinking of leaving Starfleet due to the fear she felt in crisis situations. Without actually admitting to fear, Kirk implied to her that he was sometimes as frightened as she was.

In Sickbay, Kirk's spirit leaves his body. Not realizing he is still lying unconscious, Kirk wanders along the corridors, noticing M'Ress's preoccupation along the way. He passes the rec room without hearing Chekov tell Security Officer Bloemker that Kirk has been stabbed. He asks her and the rest of Security to make discreet inquiries. Konom, in the rec room with "Herbie", asks Chekov what he thinks Kirk's chances are. Chekov flashes back to the day he first reported for duty to Kirk; he remembers perceiving him as a giant speaking in a loud, booming voice.

Gazing out an observation port, Kirk sees his dead brother, Sam Kirk, sitting at a table floating in outer space. There is a candle burning on the table, the flame of which looms large in Kirk's vision as Sam encourages him to move toward the light. However, Kirk says he cannot get out of the ship. Sam says Jim will come when he is ready.

In Sickbay, Spock urges McCoy to work faster. McCoy sarcastically says Spock can "jump in" if he thinks he can do better. In Engineering, Scotty gazes at the radiation chamber, like the one in which Spock died, thinking that if Kirk dies he cannot return as Spock did. Scotty flashes back to an occasion during Kirk's first five-year mission when he and Kirk got so drunk together on shore leave that they were literally crouched under a table, and banged their heads on its underside as they got up. Still laughing and unable to speak other than in monosyllables, they were beamed up to the Enterprise transporter room and a disapproving Spock.

Elsewhere on the Enterprise, Kirk calls out for Sam but is answered by Christopher Pike. Pike urges Kirk to give up his command, saying it will someday kill him. Pike deteriorates before Kirk's eyes from a normal man to a cripple in a wheelchair, then decays further, becoming a skeleton, as Kirk runs away.

In Sickbay, Spock places his hand on Kirk's face, mind-melding with him. Still searching for Sam, Kirk sees him outside the shuttlebay hangar. David is now sitting at the table with Sam. Kirk is finally ready to join them, but Spock appears behind him, asking him to return. Kirk says he simply wants to spend some time with Sam and David. Spock tells him he will eventually be able to do so, but that at present he has other urgent matters to attend to. Sam says he and David will continue waiting as the shuttlebay doors close.

In Sickbay, Kirk awakens two hours after his operation, McCoy and Spock beside him. McCoy urges him to rest and not talk, but Kirk says, "Pike", then clarifies, "I want Bearclaw's head on a pike." 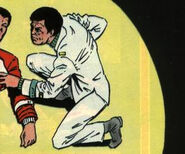