Zantra is a Zaranite man, a well-known philosopher. He lived to be more than 400 years old and was adept at chess.

Zantra solved the pure logic problem of Russell's Paradox. His solution was taught in all Vulcan schools by the 23rd century. He eventually became Special Advisor to the Zaranite High Council.

Prior to the year 2273, Zaran II joined the Federation and at least five Zaranites served as Starfleet officers aboard the starship USS Enterprise. Zantra was the leader of a secessionist faction, and in that year, he boarded the Enterprise for a trip to Zaran II. Zaranite crewmembers heard that he would petition for secession, but made it clear to Montgomery Scott that they would continue serving aboard the starship.

During a conversation in the officer's lounge with James T. Kirk and Spock, Zantra had a seizure and collapsed. He was comatose in sickbay while Doctor Christine Chapel tried to determine why his left heart was beating once every three minutes, whereas his right heart was still beating normally. In order to repair the ailing muscle tissue, Leonard McCoy proposed open-heart surgery, a questionable procedure in this case. Chapel had an operating room prepared with a fluorine-gas atmosphere so that Zantra could be operated on without his breathing apparatus. Just prior to the start of the surgery, a second McCoy appeared with Kirk and Spock, exposing the impostor as Anton Zauber. Zauber threatened Chapel's life with a laser scalpel, but Zantra regained consciousness. He removed Zauber's oxygen cable and the impostor choked on fluorine gas, unable to breathe.

McCoy explained that Zantra's heart condition was rare but a natural process. Zantra explained that their people use these times for meditation. He told Kirk and Spock that he had changed his mind and would argue against secession. (TOS comic: "The Real McCoy") 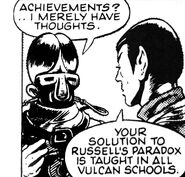 Zantra on a biobed in sickbay. 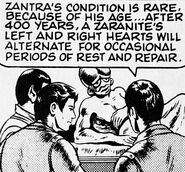 Zantra during his recovery.
Add a photo to this gallery

Retrieved from "https://memory-beta.fandom.com/wiki/Zantra?oldid=638996"
Community content is available under CC-BY-SA unless otherwise noted.