A zoo is a facility in which animals and plants are kept in a captive environment for scientific research and observation. They are often exhibited in public in a natural setting.

In the 23rd century, several zoos exhibited Targhee moonbeasts, because people were amazed by their shape-changing abilities as they shifted between two forms. (Decipher RPG module: Creatures)

The Klingon planet Ganarra III exported some of its deadly, carnivorous animals for zoos and zoological study, including Night Death. (FASA RPG module: The Triangle)

In 2254, when Christopher Pike was captured by Talosians, the Talos IV zoo featured a large, reddish-brown, feathered avianoid and a large, furry ape-like creature. (TOS episodes: "The Cage", "The Menagerie")

In the 2260s decade, James T. Kirk and other members of the USS Enterprise crew were locked inside zoos on Lactra VII, the Mantis planet and Skur. (TAS episode & Log Eight novelization: The Eye of the Beholder, TOS comics: "Beware the Beast", "Captives in Space")

In 2269, James T. Kirk, Spock, Leonard McCoy and Dawson Walking Bear visited Kukulkan's zoo, a menagerie Kukulkan maintained aboard his starship. The animals were calm, as in their minds they believed they were living in their native habitats. McCoy recognized one species in the zoo, a Capellan power-cat. (TAS episode & Log Six novelization: How Sharper Than a Serpent's Tooth)

In 2369, Amanda Rogers joked that her quarters aboard the USS Enterprise-D were so large that she could have brought her zoo with her, by which she referred to her three dogs. (TNG episode: "True Q")

In 2375, when the EMH program seemed unsuccessful, Vic Fontaine proposed to a frustrated Lewis Zimmerman that he might create a holographic zoo for children. Zimmerman did not appreciate the suggestion. (DS9 - Strange New Worlds 10 short story: "So a Horse Walks into a Bar...")

Other planets with zoos 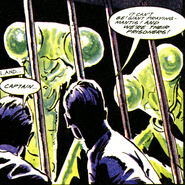 Human exhibit at the Mantis zoo.

Christopher Pike and Vina in the Human exhibit on Talos IV.